Finished and framed.
It going to be in the show 'Robots and Ray-guns' at the Ltd art gallery here in Seattle, the opening of which is going to be on Saturday the 16th.
http://www.ltdartgallery.com/calendar 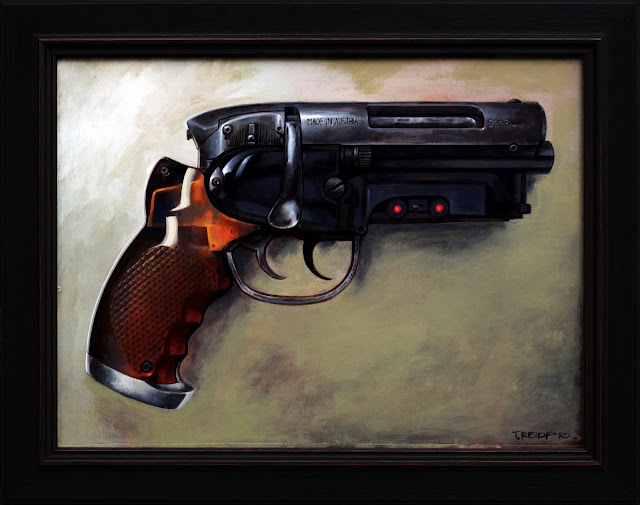 Almost done, not sure about whether or not to varnish it or not, a gloss varnish might really boost the blacks.  but gloss varnish is very reflective.  I might go round with a few bits of white here and there, but doing that is so enjoyable I might overdo it. 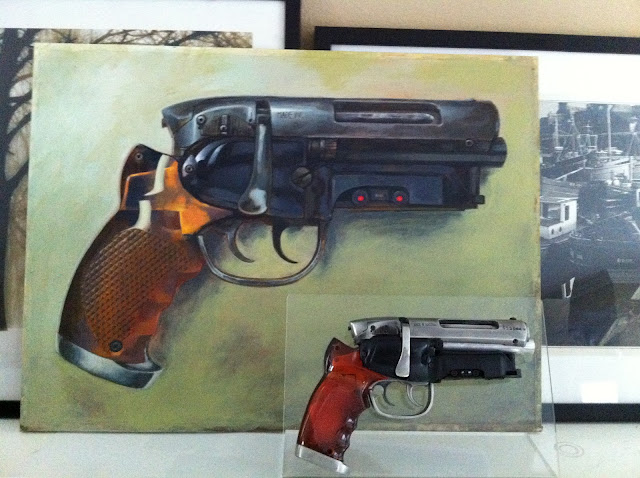 In the end it came out alright, I had enough paint in enough holes to be able to see the pattern.  So I repainted each of the dark areas from the mask work.  Following that,I painted in some orange triangles above the dark ones, which covered up most of the spheres, also I was hoping to get a sort of translucent look out of it too.  The Triangle opposite the dark one will be the one catching light, and spreading the highlight more.  So I put that in and just leave the final triangle with the underpainting showing through.  Bit rough around the edges still, but that'll have to do because I can't be arsed to paint any more small triangles. 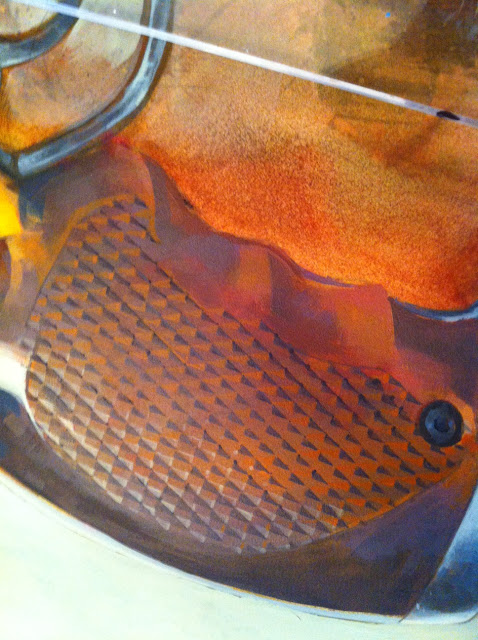 I attempt to paint into the holes.

This is hopeless of course, the paint just smears and bleeds under the paper mask.  The results are pretty smeared and inconsistent.  I'm quite so pleased with myself now. 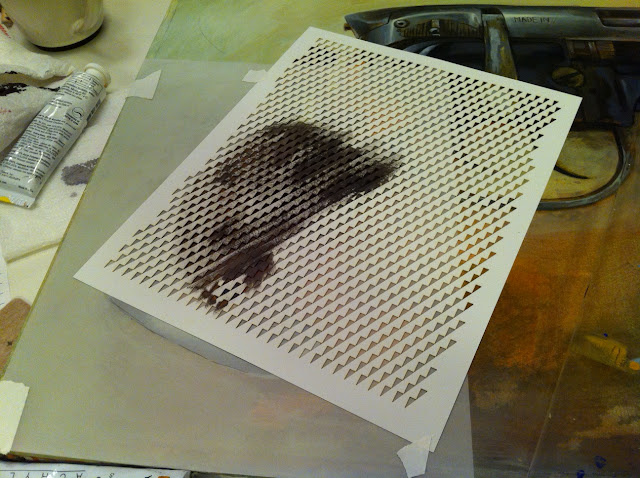 Place the mask running along the long axis of the handle. Here I'm painting the dark faces. 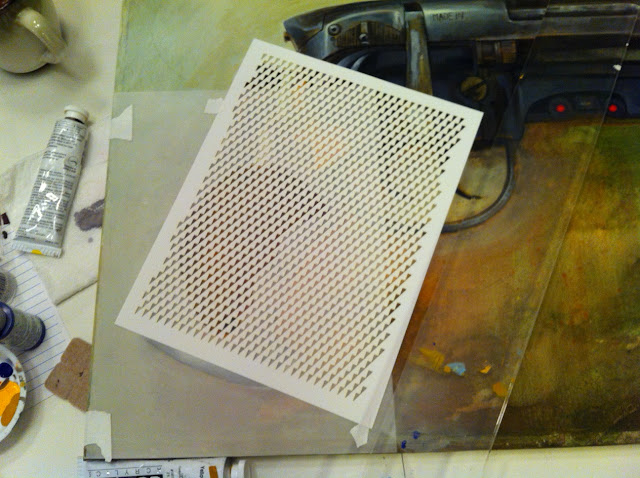 Using a bit of tracing paper to mask off the knurled area... 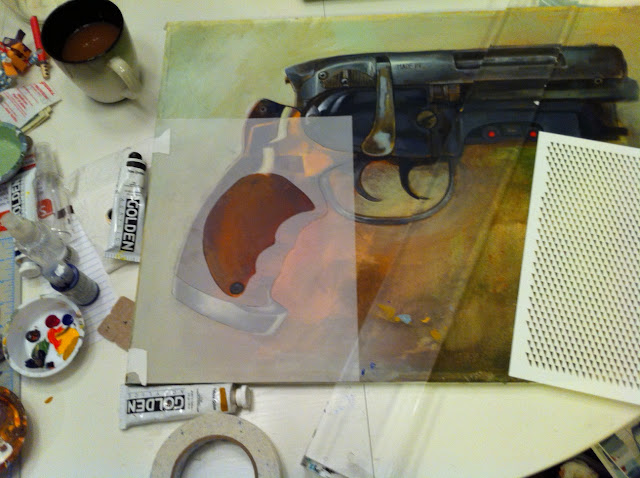 After a breif attempt at making a mask for the handle knurling (is that what it's called?) I happily remembered That I have access to a laser cutter a work.  With thanks to Laura Dubuk, I ended up with a sheet of laser cut quarter diamonds.  If the Knurling is made of lots of elongated pyramids, then I just need a mask for one of the faces of each pyramid, which is a right angle triangle.  Then, once I paint through the mask to get these faces, I can rotate and flip it over to get a mask for the other 3. All of this is just a theory, who know if it will work. 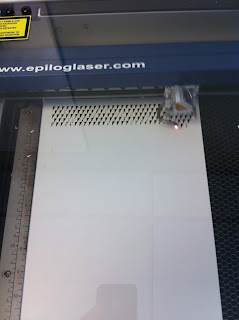 Had a go at metal work.  still need to attempt the grip knurling somehow. 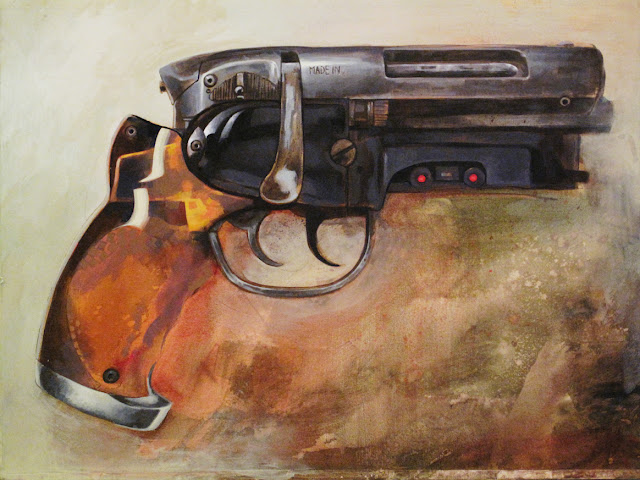 Then I start painting into it.  The painting I've done up to now is direct full opacity colour.  This time I'm trying out glazing medium to make the paint translucent, and build up layers of it allowing the under painting to show through a bit.  I always though water did the same thing, but this is more creamy and seems to go on oilier.  I'm using my trusty 1/4 inch flat brush, but also a really stiff little short that Jim showed me, used for blending work.
So far I've tried out doing some of the dark plastic and had a go at the handle. 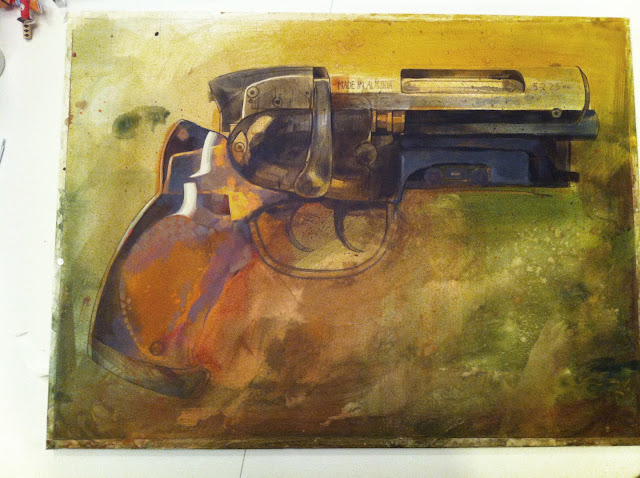 Wasn't sure when to stop. I felt I could always add more later so I stopped here.  It is nice to destroy all that white and the paper held up really well despite all the water. There is about 4 layers in various colours. 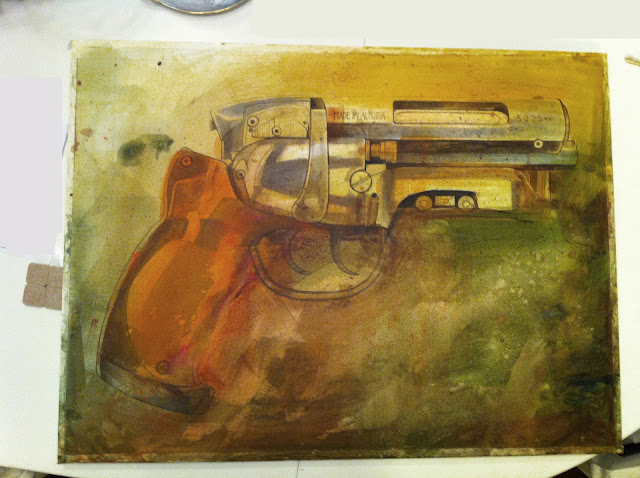 I go out into the garden, and go at it with a spray bottle, a toothbrush, and all the colours I want to show through.   The idea is to create a bunch of random watercoloury stuff and happy accidents to paint into later. 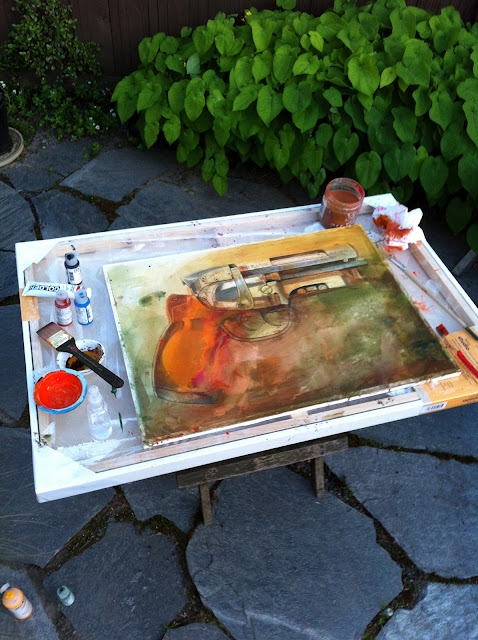 And then some Prussian Blue.  I'm doing this so I that I'll be able to see the drawing through this next bit... 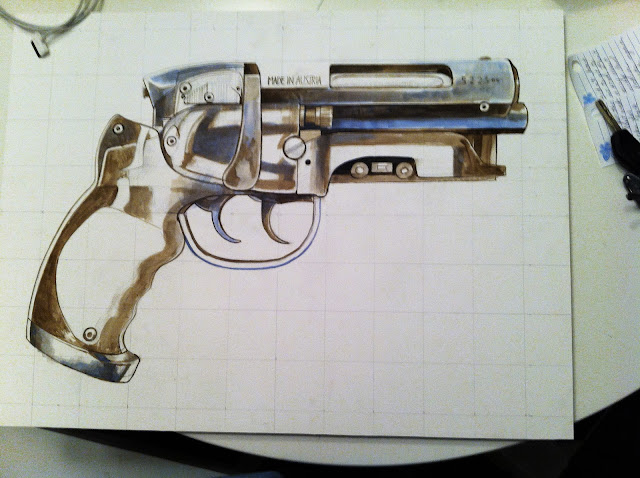 Then inking, with watery raw umber. 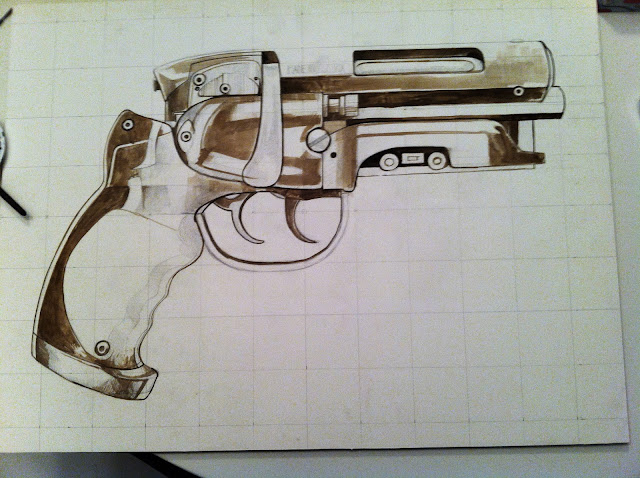 After gluing the paper to the wooden board I start to pencil in the drawing first, probably don't need to go as far as I did with this, but I like drawing with a pencil and couldn't resist a bit of hatching. 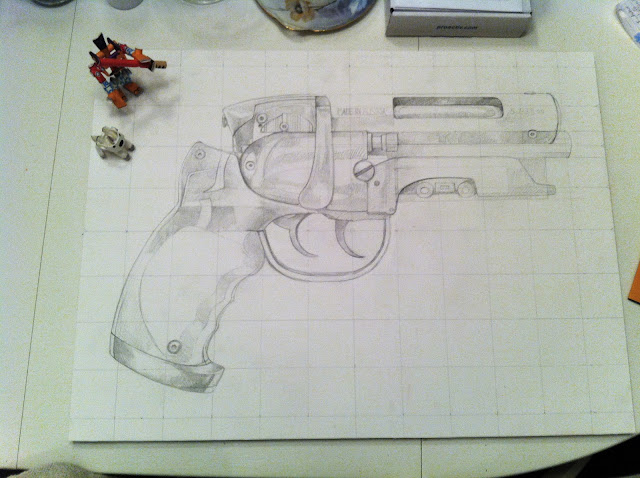 I've always been a fan of this bit of sci-fi design, perfect example of taking parts of different but similar things and artfully sticking them together.  The Amber grip is a really nice touch, suit's Bladerunner's visual style.well in my opinion.
Painting wise, this is an exercise. I'm trying a new thing for me, which is under painting.  I'm Lucky enough to work with a load of very good painters, including 2 chaps from 2000AD, Jim Murray and Jason Brashill. They gave me some great tips.

This a a replica made by Richard Coyle.  It is very accurate, cast in pewter and heavy! 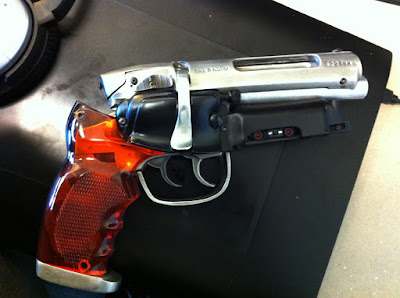